The first democratic and free elections were coming up and tensions were rising.

The first Serb barricade was set up in a village near Vukovar called Berak.

To make things worse, in May of 1990, the Territorial Defence of the Socialist Republic of Croatia was disarmed. The JNA took most of it's weapons and secured them in their barracks.

The JNA started displaying it's power. It sent a parachute unit for a "regular military exercise" to the civilian airport of Pleso.

Because of the aforementioned events, the leadership of SR Croatia decided to create it's own armed force to enforce the legally elected power in Croatia.

The leadership had to figure out a way to legally promote and start the course. They found it.

Article 25 of the Internal Affairs Law stated that the Republic's Secretary of Internal Affairs could "in case of a special societal or political situation found as many special police units as he deems necessary." - and so he did.

The order was sent out on the 21st of July, 1990. But the County Secretariats didn't listen. They were serving the Yugocommunists.

It was then decided that the recruiting would be done through local branches of the Croatian Democratic Union (HDZ). The criteria were patriotism and voluntarity.

On the 5th of August, two battalions with around 1800 members were formed. 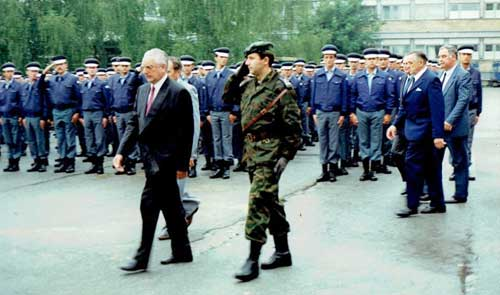 Croatian Policemen from the course.Taken on the 8th of August, 1990.

The planned two month course was not finished. The units had to go into action unprepared (the Log revolution broke out on the 17th of August).

The course was deemed a success, though. 15 companies were formed. The policemen trained on this course suppressed a Greater-Serb rebellion in Banovina in September of that same year.

This course was also what made The Anti-Terrorist Unit Lucko, ATU Rakitje (that later became the 1st Mechanized Guards Brigade "Tigers"), the Tuskanac MP unit and countless other police and ZNG (Croatian National Guard) units.